The Irish have a love affair with playing lotteries and have been supporting good causes in the country since the Irish Lotto began back in 1988.

Having gone through some changes in its history, two-thirds of the adult Irish population refularly play the game as we see it today.

Boasting a relatively small guess range, the Irish Lotto offers excellent winning odds. Players are 42% more likely to win the Ireland Lotto jackpot than the first prize of a lottery with a pick 6/49 structure.

All Irish Lotto jackpots are tax-free and distributed in a cash lump sum payment.

How to play the Ireland Lotto

To play the Ireland Lotto select six numbers from a 1-45 guess range. Seven numbers are chosen during the draw, six regular numbers and a bonus number, pulled from the same drum.

The bonus number cannot contribute to a jackpot-winning combination but can help players win three out of the lottery’s six secondary prizes.

To win the jackpot, the six numbers you selected must match the numbers drawn from the 1-45 guess range. The bonus number comes into play for the second level, the fourth level and the sixth level. The seventh and final prize level requires players to match only three numbers to be awarded a cash prize.

The Ireland Lotto takes place every Wednesday and Saturday at 19:00 GMT. Remember, if you are playing from outside Ireland that ticket sales at theLotter close a few hours before the draw. Don't forget to factor in the time difference from the country you are playing online. 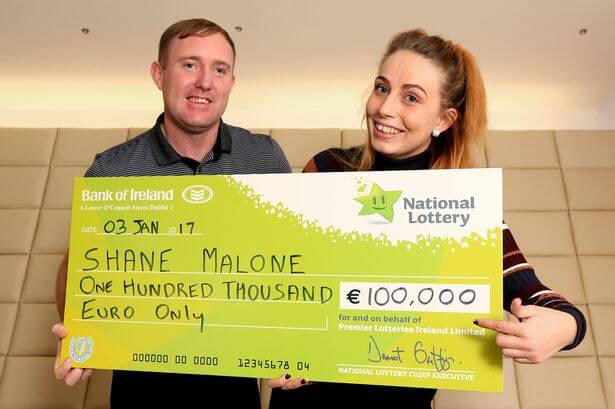 Like all the world lotteries we feature you can choose your numbers using your Lucky Numbers, manually, or by using random numbers with the QuickPick feature. Enter with a one-time regular entry, subscription, or multi-draw package; the choice is yours.

The best part? You do keep all you win; no commission is ever taken from winnings when you play online through the World Lottery Site and theLotter.

Can I play from outside Ireland?

Yes! When you play the Irish Lotto with us, an official ticket will be purchased on your behalf in Ireland.

Once your ticket is purchased, it will be scanned, and you will be able to view your ticket online and through the app, in time for the next scheduled draw.

If you're a winner, prizes will be deposited straight into your account after results are published. Big Jackpots may need to be collected in person, but we're sure that won't be a problem!

Play Ireland Lotto from any country